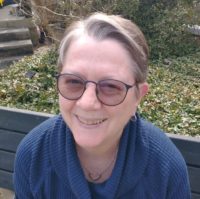 In less than three years at Unitarian Universalist Community of Charlotte (UUCC), Linn Martin has found several meaningful ways to serve in our community. She started at the front desk, where she answered phones and did other administrative tasks on weekdays. Because she had professional office experience, she felt confident she could easily step into that role. She liked that it allowed her to get to know the staff better. She looks forward to resuming that role when it becomes possible.

Volunteering for coffee service on Sunday mornings started because her daughter Bryce volunteered. Since they travel together, she figured she might as well do it too. Putting out coffee and cookies, etc. turned out to be a great way for an introvert like Linn to participate in the bustle and conversation in Freeman Hall.

When asked to serve as a youth mentor in our Coming of Age program, Linn did not feel confident around teenagers. She did it anyway. She found she loved every meeting and was amazed at how in touch the youth were with their own spirituality and creativity. She is glad she agreed to serve and got to experience that phenomenal group first-hand.

Linn joined a Discovery Circle because she thought it would be less frightening to get to know others in a small group. She found the experience magical. When she was asked to help facilitate one herself, she said yes, though she was not sure. Now, leading her second group, she is finding that even on Zoom, they are getting more connected each meeting.

Another of Linn’s current roles is on the Membership Team. She says she appreciates that team members are all working in the same direction and everyone contributes.

Linn also got involved in UUCC’s justice work, joining other UUCC volunteers in watching proceedings in local court rooms as part of the ACLU’s Smart Justice campaign. Linn counts that as one of the most eye-opening experiences she has had and says it deepened her understanding of injustice. Her current participation in our Economic Justice Core group is increasing her passion around ending cycles of poverty.

When she joined our religious community, Linn wanted to meet people and to do something meaningful. Sometimes she feels intimidated by what she is asked to do. She discovered that doing those things helps remind her she has much to offer. To members considering volunteering, Linn suggests giving it a try. Her experiences have shown her it’s worthwhile, you’ll feel good about yourself and what you’re doing, and you will get back so much from the people you work with. Thank you, Linn for so quickly sharing your many gifts throughout our community.