How To Kill A City: Gentrification, Inequality, And the Fight for the Neighborhood by Peter Moskowitz 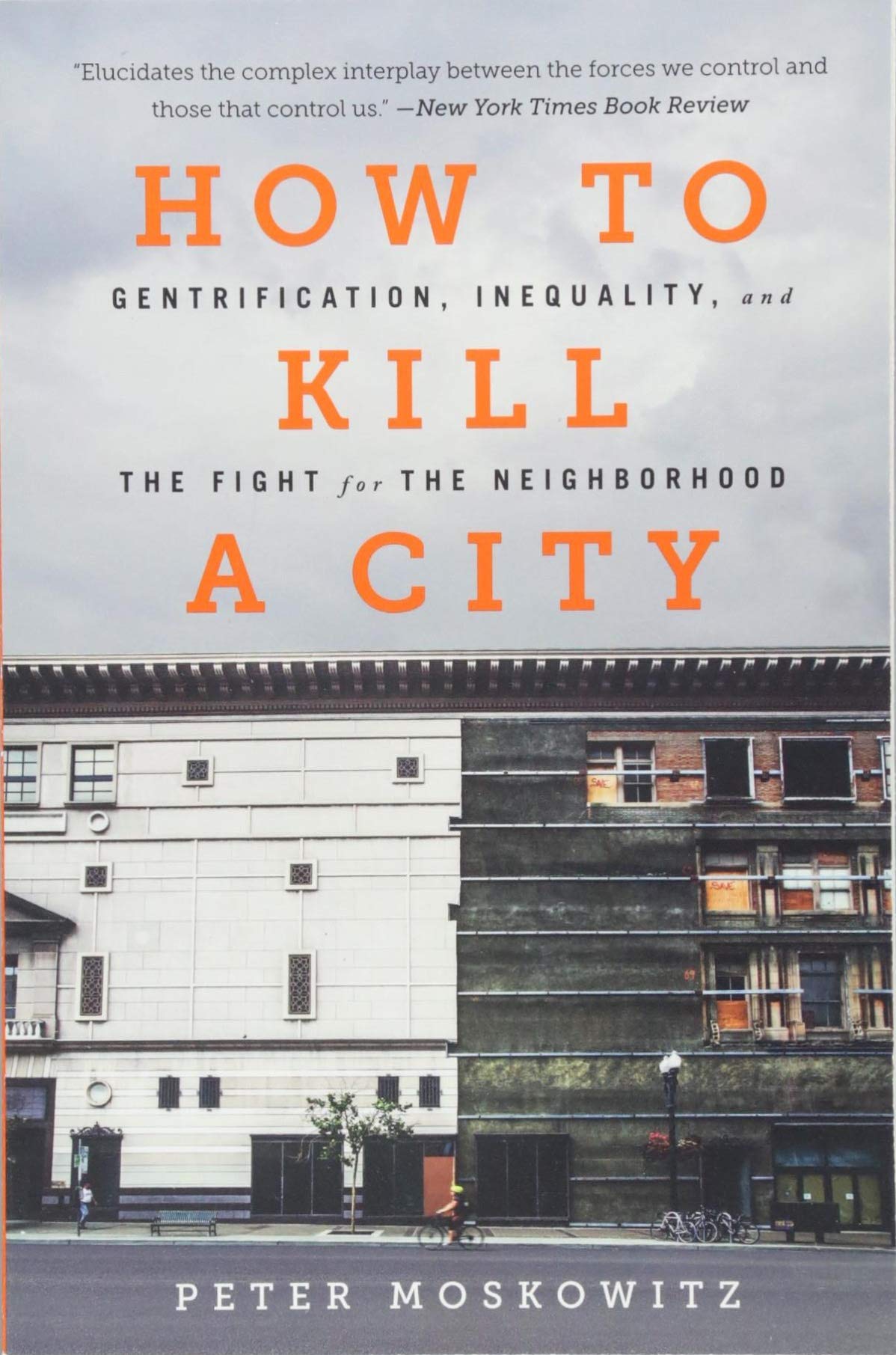 In 2017 Peter Moskowitz, a young journalist and civic activist alarmed at the erosion of treasured NYC communities by urban development projects, undertook an extensive study of the effects of gentrification in four U.S. cities—New Orleans, Detroit, San Francisco, and New York. He spent time in each city talking with community activists and observing the changes that they described, documenting the effects of the gentrifying process on the character and communities impacted by it. He has shared his observations and recommendations in a compelling and occasionally emotional narrative, concluding with several recommendations for ways to ameliorate the effects of gentrification in communities that seek to preserve their affordable and livable neighborhoods.

Moskowitz describes gentrification as a process that dismantles and displaces existing neighborhoods and communities in order to make way for new residents who are mostly whiter and richer than those who predate them. While this process naturally brings some improvements—including more people and money—to a city, it usually reduces the population diversity and cultural traditions that often make cities so dynamic and desirable.

The author dwells at length on the influence of capital in the creation of additional wealth and the resulting weakening of community in each of the cities studied. He also underscores the significant role that especially city governments play in creating the conditions, e.g., favorable zoning and development subsidies, that attract real estate investment. He occasionally resorts to vivid stories and recorded appeals as he occasionally describes block by block changes in the studied communities, where gentrification has converted affordable neighborhoods with “character” into bland and soulless clusters of high-priced real estate.

The book’s review of the evolution of U.S. housing policy provides a useful backdrop for its city-specific case examples.  As we have learned, the government introduction of longer-term mortgages by the new FHA in the 1930’s led to the classification of neighborhoods by perceived creditworthiness, introducing the infamous Class D-denoting redline. Builders/investors desiring FHA insurance for their mortgages were encouraged to avoid messy, diverse cities and to build or invest in higher classified suburbs. Suburban development accelerated after WWII, especially in the NY region, and racial segregation accelerated with it.  Then, in 1975, a nearly-bankrupt NYC began subsidizing property development for more affluent buyers in the city.  Such development has continued apace, enriching the city and its elites but displacing many residents in its lower-wealth neighborhoods.

I found PM’s explanation of the difference between American urban/housing policy and that of other more egalitarian countries to be insightful.  Most other developed countries have realized that the capital markets don’t provide habitable and affordable housing for lower-income citizens, and their housing policies and practices have made adjustments in their development and housing markets to compensate. However in the U.S., according to Moskowitz, the “pioneering…of frontiers” is a large part of our national narrative, so “gentrification is in our blood”. He likens this practice to a new form of colonialism.

Moskowitz asserts, however, that “It doesn’t have to be this way!” He concludes with several specific policies that national/municipal governments and citizen groups could put in place to counteract gentrification activities.

Land banking. Much of the land in each of the four cities (especially New Orleans and Detroit) is owned by the city government. While some of it is used as municipal infrastructure, thousands of parcels are available for sale or public use. Instead of selling them to the highest bidder, Moskowitz advocates “banking” parcels in promising areas for future public or semi-public use. Even if sold, such parcels could be conditioned for particular public uses, e.g., affordable housing.

Empowering Citizen Boards. NYC has a few citizen boards, but they are relatively powerless. Of the four featured cities, only San Francisco citizens have any chance of initiating a housing-related ballot item. Stronger citizen action will be needed to create local citizen organizations with enough power to protect their communities.

Heavily Regulate Housing. In 1942, a wartime Congress passed a law to regulate rents nationally, thereby providing the basis for the rent stabilization that survives today in NYC. As more and more cities deal with a growing housing crisis, the U.S. should establish a national rent regulation law.

New Deal for Public Housing. Other nations have proven that public housing can be done well; in Hong Kong almost half the housing stock is publicly owned. We should learn from such examples and expand the use of public housing in the U.S.

Raise Taxes and Wages, Spend on Poor. Moskowitz’ final policy prescription transcends gentrification matters per se. In order to afford life in threatened neighborhoods, current low-wealth residents need to have enough income—i.e. higher wages—to afford higher rents and be able to organize effectively. At the same time, national and state governments need to raise taxes enough to be able to fund the social supports that lower-income families need to be stably housed.

While the author’s analysis of the nature and impact of gentrification is insightful and compelling, his resort to government action as a restorative force seems illogical. After all, Moskowitz has persuasively made the case that government policies are a major cause of most gentrification stories. Perhaps he recognizes this fallacy himself—the closing pages are given over to his recent efforts to deal with his personal frustration by creating personal connections and shared interests with neighbors in his own immediate community.

I would recommend Moskowitz’s eminently readable book as a helpful source of insight into the forces creating gentrification in U.S. cities and the impacts of that process on lower-income neighborhoods with established cultural traditions. Unfortunately, useful information about how activists can effectively combat these forces should be sought elsewhere.